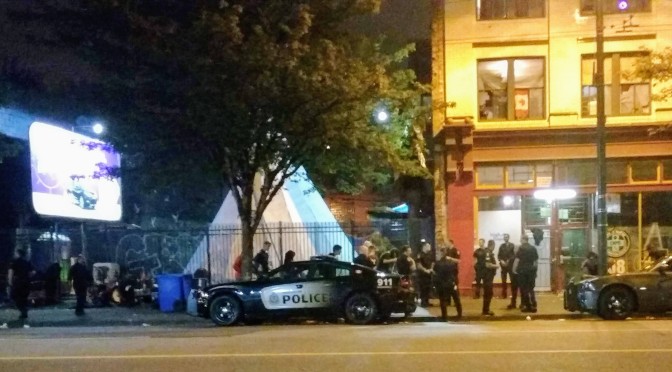 Remember that fuss about the report that was released at the end of April by the Provincial Health Officer: “Stopping the Harm: decriminalizing people who use drugs”? Apparently not really.

It’s about the process of becoming criminal and how people who use drugs think of themselves as being outside of the the law : it punishes us, it does not protect us. But this report asserts that the law belongs to us too because we are also citizens and that’s the point of decriminalizing people.

now this is a public health intervention

What the report says is that policing and ongoing criminalization is preventing people from accessing health services, from accessing all kinds of Public Services, keeping us in poverty, making people vulnerable to overdose and endangering lives. Criminalization is undermining all of the health related activities that have been authorized through the initial intervention back in December 2016.

And it’s not just another report by experts that goes into the air and things may be happening or maybe not. The report and its author, the Provincial Health Officer is authorized and empowered through the Public health act and this report has a particular force because of this state of emergency. It is not just another report.

“Stopping the Harm” is addressed to the government of British Columbia, from a senior officer appointed by government to the people’s elected representatives. This is a high-level intervention, not to an individual minister but to the executive of the government of the province, to the premier and the cabinet, and four ministers.

Consider the precedent. let’s go back and think about the last time we were at day 1114 of a public health emergency oh wait.

This is how to deal with an emergency. This is the most extreme intervention that provincial law allows. It has never been done before.

We need the government to consider these recommendations. It will be painful. This is a terrible situation to face directly. We can help them by being honest and brave, but they must do the same. We gotta talk, and this recommendation must be considered by the people elected to do so.

Silence is death. The legislature, the cabinet table – these are the places where this discussion must happen now. Let’s all take it seriously — as seriously as we possibly can, and in the terms suggested by this report (among others): as a political issue.

very local media at the end of the drug wars

news, commentary, & resources for people who use drugs in the downtown eastside

one of the photos of me taken for the Sun/Province article this last weekend, taken by @nickprocaylo @mayorkennedystewart sent me the photo, which is cool #portrait #heythatsme
just your standard bunny riding a horse #yougotaproblemwiththat
"Ignore previous cookie" #fortune
when you let the Market decide
#nightphotography #streetlights
things are beautiful and terrifying #dtes
did somebody lose their #chandelier
#streetart #mural #publicart #ghostsigns #urbanphotography #palimpsest #psychogeography #history #expo86 #wallysburgers
Follow FFS : free futures society on WordPress.com